There are some differences between British English and American English, not only in pronunciation, but also in spelling and in the usage of grammar.

In our daily lives it doesn’t matter which version you are using, just if you have picked one stick to it an be consistent. If you decide that you want to use American English spellings, then be consistent in your spelling (i.e. The color of the orange is also its flavour – color is American spelling and flavour is British).

Here are some examples for you: 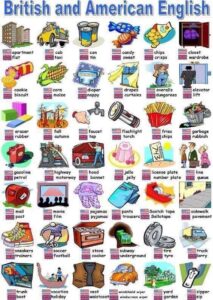